What can the body teach the mind?

A recent essay by Haskayne scholar Julian Norris describes the results of an experimental course for 60 MBA students studying complexity in leadership. Positive responses from students raise the possibility that physical disciplines, such as the Japanese martial art known as taijutsu, may enhance both the capacity and the competency of leaders grappling with multi-dimensional problem solving. By asking students to embody leadership, Norris sought to teach systems thinking in contrast to traditional linear, ordered, mechanistic abstractions.

Alongside more conventional cognitive approaches, Norris — who is himself a taijutsu instructor — introduced his class to what he calls a somatic (body-centric) method of self-awareness. Half the time (20 hours) was spent in a dojo setting, developing skills derived from the medieval ninja tradition. According to experts, taijutsu ‘builds the capacity to defend oneself from “people who might be significantly larger, stronger or faster than oneself”, using asymmetric intervention, creative adaptation, unconventional weapons and unorthodox movement (Pettinen, 2014; Gattegno, 2020; Mitchell, 2020).’

Norris adapted five drills in an inclusive, non-coercive, and non-competitive environment. His pedagogical intent was informed by a desire to blur the lines between informational and transformational educational traditions. The course augmented Kolb’s facilitation model (2014) of experience-reflection-abstraction with somatic coaching, process-oriented and critical reflection techniques, transformative learning practices — and the unconventional teachings of taijutsu’s grandmaster, Masaaki Hatsumi.

Each drill invited the student to explore one aspect of their embodied capacity to respond more skillfully in complex situations. Importantly, students could choose simply to observe or step out at any time.

Shiho tenchi tobi, literally translated as ‘four directions heaven and earth leaping’, aimed to cultivate reflexivity and systems awareness in the context of dodging thrusts from a staff. Students practiced moving their focus away from the symptom of the problem (the staff) to the systemic cause (the person wielding the staff.)

Santo tonko no kata, ‘the way of the escaping rat’, sought to cultivate curiosity though trying to escape a wrist hold. Students discovered new ways to move using their free limbs rather than focusing on constraints, how to lead without force and how to recognize the vulnerability of their partner.

Muto dori, or ‘no sword capture’, cultivated audacity by showing how getting closer to an armed attacker can be safer than remaining at a distance. Students transferred the physical skill of close contact with a threat into relationship analysis.

Randori, or ‘chaos-taking’, placed each student in the midst of a random ‘zombie attack’ of their peers to cultivate fluidity and state-shifting. As they practiced, they became more creative in their movements, less likely to strike defensive postures, and achieve ‘flow’.

Finally, students explored the ‘self in the system’ through handling a five-foot long octagonal staff — the shakujo. Repetitive practice revealed dominant and non-dominant physicality encouraging heightened self-awareness, leading to relaxed stillness while in motion. The exercise revealed how complex living systems can be — and how varied our responses must become.

Anecdotal response from students suggests that the approach may help bridge the gap between abstract classroom tuition and experiential learning. One in 5 students stated that it was the most valuable course in their MBA to date. The dojo experience was described as ‘life-changing’. Many students became aware of their own bias to seek control by force of will which one described as ‘muscling my way through.’ The taijutsu discipline introduced an alternative mode of leadership practice characterized by ‘softness, fluidity and grace.’

The experiment suggests that novel teaching methodologies centred on physical experience can be integrated successfully into more conventional academic MBA programs. Control group research will be required to establish metrics for student populations at scale.

Norris is hopeful that the taijutsu experiment will contribute to other hybrid forms of teaching, where traditional management competencies are nurtured in the fertile ground of fully developed capacities. For now, 60 Haskayne students have been privileged to experience a unique encounter with the strategy and tactics of the real-life ninja who were the spies, advisors, bodyguards and guerrilla fighters of the legendary samurai period.

You can read the full text of the article in The Journal of Management Education here. 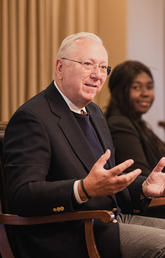 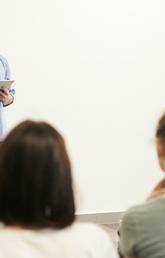